Ten years later, how has the IBSA fund been supporting South-South partnerships on the ground?


Why don’t partners in South-South cooperation care about the aid effectiveness agenda? Why don’t they adhere to the commitments embodied in the Paris Declaration on Aid Effectiveness and the Accra Agenda for Action? These are questions I frequently hear.

Perhaps it is time to think anew.

At the Global Partnerships for Effective Development Cooperation meeting in Mexico last month, we heard once again that South-South cooperation is a common endeavor of peoples and countries of the South, born out of shared experiences and sympathies, based on their common objectives and solidarity, and guided by the principles of respect for national sovereignty and ownership, free from any conditionalities.

Developing countries are indeed reshaping the international cooperation landscape with new principles, ideas and practices. The environment in which South-South cooperation is currently implemented has changed significantly since the 1970s, when the basic institutional arrangements governing it were put in place. In the 1970s, the vast majority of developing countries were underdeveloped and heavily dependent on developed countries for the transfer of knowledge and technology. Over the past two decades, a number of developing countries have achieved comparatively high levels of development, underpinned by an expanding middle class and scientific and technological expertise, and are demonstrating many competencies that are contributing to higher growth, economic resilience and other positive trends in the global South.

These developments have accentuated the possibilities for promoting more intensive forms of cooperation among developing countries in pursuit of their national development plans and internationally agreed development goals, such as the Millennium Development Goals and the post-2015 development agenda. It is within this context that the High Level Committee on South-South Cooperation, the governing body for South-South Cooperation at the UN comprised of all members of the United Nations Development Program, meets this week to review what South-South has achieved and how its implementation on the ground can be strengthened. 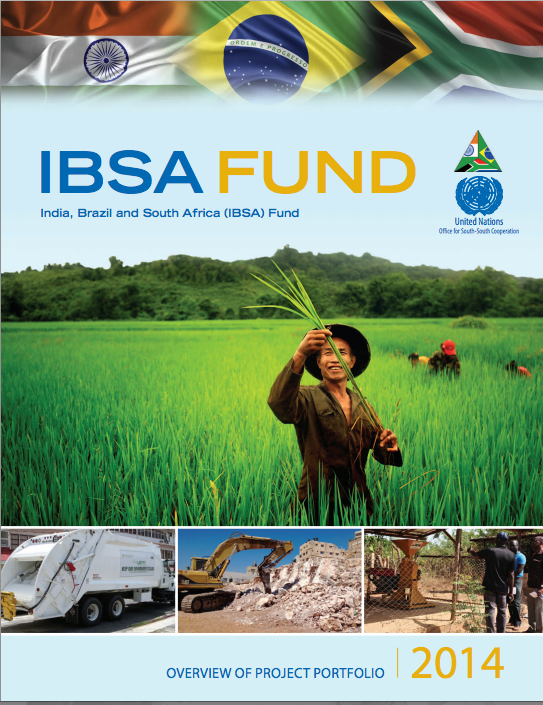 Read the IBSA Fund overview of project portfolio 2014 here
So far, the IBSA Fund has contributed with more than US$27 million to 21 projects in 13 countries. In Haiti, the fund helped build a waste collection system in the neighborhood of Carrefour Feuilles in the capital Port-au-Prince. The venture employs 385 neighborhood residents, including 207 women. More than 150,000 people benefit from improved sanitation and reduced flood risk from garbage-clogged canals. The IBSA Fund also helped Guinea-Bissau to train over 4,500 farmers (half of them women) in improved techniques of rice cultivation, and citrus fruit and mango production, contributing to income generation and poverty alleviation in the country. In Palestine, the Cultural and Hospital Center for the Palestinian Red Crescent Society in the Gaza strip was entirely rebuilt, and in Burundi the revamped Center for Prevention and Treatment of HIV/AIDS now enables around 39,000 consultations per year.

Ten years since its establishment in 2004, the India, Brazil and South Africa Facility for Poverty and Hunger Alleviation (IBSA Fund) is a good example of how South-South cooperation is delivering results on the ground. With just USD3 million per year, the IBSA Fund is very tiny when compared to other development cooperation initiatives (the Global Fund against AIDS, Tuberculosis and Malaria, for instance, has invested more than USD20 billion since 2002). Beyond the financial contribution though, the Fund aims to put the principles of cooperation and solidarity in practice and set a new paradigm for development cooperation.

As emerging economies that still have their own development requirements, IBSA members are determined to distance themselves as far as possible from traditional donor-recipient relationships by supporting replicable and scalable projects based on the capabilities available in the IBSA countries themselves and on their own national experiences and capacity building expertise. And the results are out there.

The fund operates through a demand driven approach and is open to all developing countries. Governments requesting support from the fund initiate discussions with IBSA representatives worldwide. They submit proposals to the IBSA Focal Points in the three capitals for approval. Proposals that receive favorable indication are taken to the IBSA Fund Board of Directors, comprised of the IBSA Deputy-Permanent Representatives for the United Nations. The Board meets every four months to develop, monitor, analyze and approve project documents. The United Nations Office for South-South Cooperation acts as the fund manager and the Board of Directors’ secretariat, intermediates the contact with potential executing agencies, and facilitates project formulation and implementation. IBSA projects are implemented through partnerships with local governments, UNDP or national institutions to ensure it is locally owned and managed.

South-South principles also guide the (more or less objective) criteria to evaluate the proposals submitted to the Fund, which include: the potential to reduce poverty, alignment with the priorities of the recipient country, use of the capabilities available in the IBSA countries and their successful experiences, sustainability, expected impact, possibility that the initiative be replicated, innovation, and project completion within a 12-14 months timeframe. Funding is available for projects in agriculture, education, energy, environment and climate change, health, human settlements, public administration, revenue administration, science and technology, and social development, and other areas where IBSA countries have developed national expertise and according to the demand of the partner.

Under the spirit of mutual benefits, the IBSA Fund also supports the development agenda of the member countries themselves. India, Brazil and South Africa may agree with their partners to terminate certain existing bilateral programs and attach them to the development fund, to form a larger initiative for cooperation with other IBSA members. Thus, IBSA members and partners could benefit from economies of scale, increased knowledge exchanges, and strengthened global impact when using the Fund. As other South-South funds and facilities are created both within UN agencies and International Development Banks, it would be helpful to conduct a benchmarking exercise to identify standards or 'best practices' to enhance design and performance.

North-South, South-South, South-North, East-East…we all care about effectiveness. We also care about how the term can be framed to allow both accountability and innovation, as well as results. Would this be the IBSA Fund’s main lesson for the decade to come?

Pause for a coffee?

Cafezinho (ca-fay-zheen-yo) is the diminutive for black coffee in Portuguese and almost a synonym for "cozy", "informal", "intimate" in Brazil. All over the world people meet over coffee to catch up, engage in discussions, exchange ideas. Inspired by the cafezinho and the senses that it evokes, this blog is a meeting point for people who - like me - believe that development solutions work best when they are designed with peers who have faced similar challenges or are going though similar constraints. This blog is also an open space for practitioners to connect with each other, across countries, across regions, and share their ideas and experiences on how to improve international development systems, modalities and practices. Guest bloggers from developing countries will be invited to post regularly, encourage other practitioners to use social media, and build a critical mass of Southern thinkers - and doers! All in short texts to be read in a coffee break. For you to feel the comfort of your home, wherever it is.

*Read the blog in 80+ languages with the translator widget below!